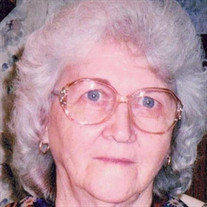 Geneva L. Haycraft, age 96, of Forrest City, died Tuesday, November 2, 2021, at her daughter's home in Forrest City. Mrs. Haycraft was born October 11, 1925, in Balch, Arkansas, and was the daughter of Albert A. Downey and Bertha Brents Downey. She lived in St. Francis County most all of her life, was a housewife, and a Baptist. Mrs. Haycraft married Farnell Haycraft and he preceded her in death in 1998. She is survived by one daughter, Regina Nicholas of Forrest City, one brother, James Downey of Forrest City, one step-son, Billy Haycraft of Wynne, five grandchildren; Stephanie House, Sheila Gracey, Gwen Needham, Andy Pippin and Angie Pippin, twelve great-grandchildren and ten great-great-grandchildren. She had a special friend, Calvin Hodges, who preceded her in death in 2015, two sons; James 'Mickey' Purser and Glenn Pippin, one daughter, Sigrid Houston, two brothers; Calvin Downey and Burl Downey, two sisters; Glady Hopkins and Lillian Garner,two step-children; Jerry Haycraft and Ruth Ann Haycraft, all preceded her in death. Services for Mrs. Haycraft will be held at Stevens Funeral Home Chapel, 2:00 P.M. Thursday, with burial in Forrest Park Cemetery. Visitation will be Thursday, 1:00 P.M., until the time of the service. Stevens Funeral Home is in charge of arrangements. You may log on to stevensfuneralhome.net for the on line registry.

The family of Geneva L. Haycraft created this Life Tributes page to make it easy to share your memories.

Send flowers to the Haycraft family.