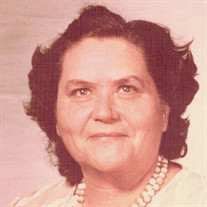 Mrs. Geneva Casey, age 95, of Forrest City, died Tuesday, March 9, 2021. She had been in poor health for the past year and a half. Mrs. Casey was born August 15, 1925, in St. Francis County, and was the daughter of George Washington Morrow Padgett and Emma Watts Padgett. She lived in St. Francis County all of her life, retired from General Industries, and was a Baptist. After retirement she continued to work on the farm. Her cows were her babies. She loved nothing better than to be out in the pasture among them, especially when there were calves aplenty. All she had to do is call and they would come running. Crocheting and quilting filled her winter months when weather confined her to the house. Fishing and catfish was her other passion, give her a cane pole, a worm, and a seat on the river bank and she would be content. Mrs. Casey married Fremen Casey in 1941, and he preceded her in death in1976. She is survived by two daughters; Connie Huey, and husband, Donald, of Cherry Valley, and Cathy Sandra Coats, and husband, Mike, of Colt, two sons; Ronald Casey and Rickey Casey, both of Forrest City, one sister, Carolyn Mitchusson of Wynne, eleven grandchildren, several great-grandchildren and several great-great-grandchildren. She had one son, Ralph Casey, two grandchildren, Jay and Jody, two sisters; Myrtle Leslie and Julie Walls, and five brothers; Louis Padgett, Raymond Padgett, Virgil Padgett, George Padgett, and Wilburn Padgett, who all preceded her in death. Services for Mrs. Casey will be held Graveside, 11:00 A.M. Saturday, at the Forrest Park Cemetery. Visitation will be Saturday, 10:00 A.M., until the time of the service, at Stevens Funeral Home. You may log on to stevensfuneralhome.net for the online registry.

Mrs. Geneva Casey, age 95, of Forrest City, died Tuesday, March 9, 2021. She had been in poor health for the past year and a half. Mrs. Casey was born August 15, 1925, in St. Francis County, and was the daughter of George Washington Morrow... View Obituary & Service Information

The family of Geneva Casey created this Life Tributes page to make it easy to share your memories.

Send flowers to the Casey family.