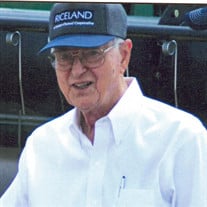 Mr. Eugene 'Gene' McGraw, age 95, of Palestine, died Monday, January 20, 2020, at his home in Palestine. Mr. McGraw was born August 18, 1924, in Crocketts Bluff, Arkansas, and was the son of Grover 'G.C.' McGraw and Margaret Schwab McGraw. He lived in St. Francis County most all of his life, was a farmer, was a member of the St. Francis County Farm Bureau where he served at Vice President, was a Justice of the Peace for St. Francis County for many years, had served as a member of the Palestine School Board, and was a member of the Palestine Cumberland Presbyterian Church where he had served as Elder and church secretary. Mr. McGraw married Mildred Brann in 1949, and she survives him along with one son; Terry McGraw, and wife, Debbie, of Palestine, one brother, Bob McGraw of Palestine, two sisters; Gladys Rounsavall of Little Rock, and Pauline Spurgers of Farmersville,Texas, two grandchildren; Clint McGraw, and wife, Lindsey, and Ashley Martin, and husband, Chesley, four great-grandchildren; Rhealee and Cason McGraw and Easton and Jase Martin and two loving caregivers; Lynda Brazile and Kayla Simpson. Services for Mr. McGraw will be held at the Palestine Cumberland Presbyterian Church, 11:00 A.M., Saturday, with burial in Bell Cemetery. Visitation will be Saturday, at the church, 10:00 A.M., until the time of the service. Stevens Funeral Home is in charge of arrangements. You may log on to stevensfuneralhome.net for the online registry.

The family of Eugene 'Gene' McGraw created this Life Tributes page to make it easy to share your memories.

Send flowers to the McGraw family.