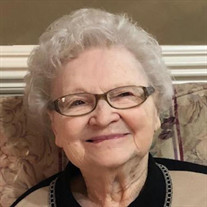 Edith W. Hughes, age 102, formerly of Caldwell, died Thursday, August 6, 2020, at the St. Francis Hospital in Bartlett, Tennessee. Mrs. Hughes was born December 30, 1917, in Caldwell, Arkansas, and was the daughter of Abraham Martin Whitmer and Lucinda Jane Lewis Whitmer. She was a retired sales clerk for the Collins Fabric Store and was a member of the Caldwell First Baptist Church. Mrs. Hughes married Jessie Elsworth Hughes in 1938, and he preceded her in death in 1988. She is survived by two daughters; Patricia Jones Wesley, and husband, Howard, of Sheridan, Illinois, and Norma Jean Lindsey, and husband, Jim, of Bartlett, Tennessee, three grandchildren; Karole A. Kurtz, Sheri Lindsey Bell, and Traci Lindsey Adams, and husband, Brett, five great-grandchildren; Elizabeth A. Bell, Courtney Kurtz, Erik Kurtz, Sarah Bell, and Lauren Adams, and a host of nieces and nephews. Services for Mrs. Hughes will be held at Stevens Funeral Home Chapel, 2:00 P.M., Saturday, with burial in Hughes Cemetery. Visitation will be Saturday, beginning 1:00 P.M., until the time of the service. Stevens Funeral Home is in charge of arrangements. You may log on to stevensfuneralhome.net for the online registry.

The family of Edith W. Hughes created this Life Tributes page to make it easy to share your memories.

Send flowers to the Hughes family.