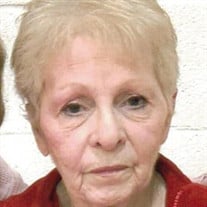 Mrs. Dorothy Louise Johnson, age 77, of Caldwell, died Wednesday, April 15, 2020, at the St. Bernard's Hospital in Jonesboro. Mrs. Johnson was born January 3, 1943, in Philadelphia, Pennsylvania, and was the daughter of Charles Lawson and Betty Brown Lawson. She lived in St. Francis County most of her life, was retired from D.J's. Bar-B-Que, and was a member of St. Peter's Catholic Church in Wynne. Mrs. Johnson married Jerry Johnson and he preceded her in death in 2006. She is survived by one son, Charles Clayton Jennings of Memphis, two daughters; Laura LeeAnn Jennings and Erin Elizabeth May, both of Caldwell, two brothers; David Lawson and Bobby Lawson, both of Forrest City, one sister, Jo Ann Jones of Nashville, Tennessee, four grandchildren; Lawson, Eden, Devan, and Aubrey, and two great-grandchildren, Katie and Parker. A private graveside service will be held at the request of the National Funeral Directors and the Arkansas Governor. Stevens Funeral Home is in charge of arrangements. You may log on to stevensfuneralhome.net for the online registry.

The family of Dorothy Louise Johnson created this Life Tributes page to make it easy to share your memories.

Send flowers to the Johnson family.