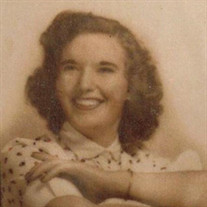 Donna Ray Walls, age 85, of Forrest City, went to meet her Lord and Savior, Thursday, March 4, 2021, at the Forrest City Medical Center in Forrest City. Her death came sudden and unexpected. Mrs. Walls was born January 6, 1936, in White Hall, Arkansas, and was the daughter of Robert Truman Andrews and Mattie Ramsey Andrews. She lived in Wynne until moving to Forrest City in 1982. She had worked for the Yellow Jacket Cafe in Wynne, Wynne Shoe Factory, and was retired employee from the Forrest Park Cemetery. She was a member of the Rusty Nails Cowboy Church. Donna was a Christian woman who cared deeply for her family and friends and prayed for her family every day. We will miss her dearly, but we know she is happy and is dancing the 'Wahtusi' in heaven with Jusus. Donna married Murry Walls Jr., in 1979, and he preceded her in death in 2007. She is survived by two daughters; Donna Sweeney and Doris Moroz, both of Monroe, Georgia, two sons; Carl Catlett and Tommy Catlett, both of the home, one step-son, Elbert Walls of Colt, three step-daughters; Dean McGregory of Colt, Dale Gilmer of Marion, and Judy McNeill of Mississippi, several grandchildren, great-grandchildren, and three great-great-grandchildren. She was preceded in death by one daughter, Linda Catlett and one step-son, Douglas Walls. Services for Mrs. Walls will be held at Stevens Funeral Home Chapel, 2:00 P.M., Monday, with burial in Harris Chapel Cemetery. Visitation will be Monday, 1:00 P.M, until the time of the service. Stevens Funeral Home is in charge of arrangements. You may log on to stevensfuneralhome.net for the online registry.

The family of Donna Ray Walls created this Life Tributes page to make it easy to share your memories.

Send flowers to the Walls family.