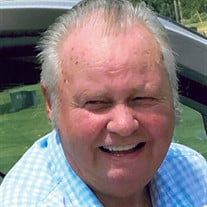 Mr. Donald Ray Douglas, age 71, of Forrest City, died Monday, April 1, 2019, at his home in Forrest City. Mr. Douglas was born July 20, 1947, in Wynne, and was the son of U. V. Douglas and Hazel Mae Harris Douglas. He lived in St. Francis County most of his life, was a truck driver, and a member of Midway Baptist Church. Mr. Douglas married Betty Moody in 1968, and she survives him along with one daughter, Sheila Douglas Carson, and husband, Tommy, of Oxford, Mississippi, two sons; Wade Douglas, and wife, Kim, and Chad Douglas, all of Forrest City, one brother, Bobby Douglas of Forrest City, two sisters; Kaye Gustavus of Shell Lake and Pat Luker of Forrest City, six grandchildren; Matthew, Brent, Bradley, Wesley, Coleton and Zakk, and two great-grandchildren; Zane and Brantley. He had one brother, Thomas Douglas, one sister, Bonnie Casey, and his parents; U. V. and Hazel Douglas, who preceded him in death. Services for Mr. Douglas will be held at Midway Baptist Church, 2:00 P.M., Thursday, with burial in Bell Cemetery. Visitation will be Wednesday evening, 6:00 till 8:00 P.M., at the church, with Stevens Funeral Home in charge of arrangements. You may log on to stevensfuneralhome.net for the online registry.

The family of Donald Ray Douglas created this Life Tributes page to make it easy to share your memories.

Send flowers to the Douglas family.