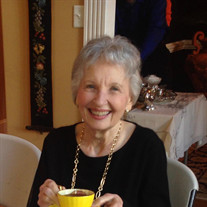 Mrs. Christy Ann Mashburn Rolfe age 86, died Monday March 30, 2020 in Centerton, Arkansas. Christy was born April 6, 1933 in Little Rock and was a long time resident of Forrest City, Arkansas. Christy was preceded in death by her husband, Samuel Adrian Rolfe II, her parents Zack and Christine Mashburn, and her only sibling, a brother, Dr. Don Mashburn (Mary Lou). She is survived by three daughters: Christy Rolfe Horne (Bill); Patti Rolfe Purselley (Tim); Jeannie Rolfe Espey (Speck); 11 Grandchildren and 11 Great-Grandchildren. Also surviving her is a cousin who was like a brother, Ralph Mashburn of Lonoke, AR and his wife, Nancy. Christy was born into a warm, loving, and close-knit family of Mashburns who were living in Little Rock, AR after the depression. Although poor, they filled their lives with faith, family, music, and lots of laughter. Those foundation stones helped form and mold her family values that were passed faithfully to her children and are still being passed down today. In the seventh grade her family moved to Forrest City, AR. Christy quickly formed lifelong friendships that she continued meeting regularly with until her poor health prevented doing so. She graduated from High School in 1951 and entered Arkansas State Teachers College, (now UCA). That summer, Sam Rolfe’s Father bet him that he couldn’t get a date with that cute girl in their church named Christy Mashburn. He did win that bet and ended up marrying and settling down in Forrest City where Sam was a farmer and hotel broker for many years. Christy took her role of homemaker as a holy calling, and was passionate in her role as loving wife and mother. Sam and Christy taught Sunday School for forty plus years, first at Calvary Baptist Church, then First Baptist of Forrest City. Many couples were mentored and taught principles of faith and family by them. Christy poured her life into young women both in and outside of her church. During this period of her life, Christy read the book by Max Lucado entitled “In the Grip of Grace” and credited it with powerfully impacting her life. She was known to order dozens of these books and to pass them out to those she met whom she felt could benefit from its message. Later in life, Christy and Sam worked for Campus Crusade for Christ helping to develop the JESUS Film. The JESUS film has been seen in every country in the world and translated into hundreds of languages. This film has been recognized as the single most effective tool in reaching the unreached world with the story of Christ and the gift of God’s Grace. An example of Christy’s trust in the LORD was illustrated in the middle of her progressing dementia. She was aware of her condition and knew that it would get worse. One day, while speaking to her 3 daughters, understanding that she was facing the downward spiral of dementia, emphatically stated 3 times, “I want you to know, It’s ok it is God, it’s ok it is God, IT IS OK, IT IS GOD!” She was telling us all that she was comfortably safe In the Grip of God’s grace. The family rejoices in this celebration of Christy’s birth into Heaven. They ask that any Memorial gifts be given (in lieu of flowers) to Samaritan’s Purse, P.O. Box 3000, Boone, NC 78607, 828.262.1980, samaritanspurse.com. Private graveside services will be held at Mt.Vernon Cemetery in Forrest City. Please visit online registry at stevensfuneralhome.net.

The family of Mrs. Christy Ann Rolfe created this Life Tributes page to make it easy to share your memories.

Send flowers to the Rolfe family.