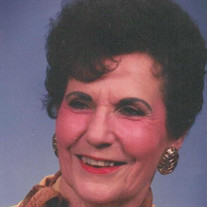 Christine P. Wilkins Hampton, age 97, of Colt, died Sunday, August 1, 2021. Mrs. Hampton was born August 1, 1924, in St. Francis County and was the daughter of Preston Parkman and Mary Adlaide Drummond Parkman. She lived in St. Francis County most of her life, was a retired manager for Sears and Roebuck after thirty-five plus years, was a member of the Kiwanis, a supporter of St. Jude and Feed the Children. She was a member of the Colt Baptist Church. Mrs. Hampton married Sidney R. Wilkins in 1941, and he preceded her in death in 1992. She married John Hampton and he preceded her in death in 2015. She is survived by one daughter Mary Beth Dennis of Colt, one son, Ronnie Wilkins, and wife, Elaine, of Eads, Tennessee, one brother, Donald Parkman, and wife, Mary, of Wheatley eight grandchildren, fourteen great-grandchildren, and several great-great-grandchildren. She was preceded in death by her son, Wendell Wilkins, three brothers; Dave Parkman, Forest Parkman, and Jerry Parkman, two sisters; Venetta Arbour and Henrietta Morphis, and one son-in-law, Bobby Dennis. Services for Mrs. Hampton will be held at Stevens Funeral Home Chapel, 2:00 P.M., Wednesday, with burial in Forrest Park Cemetery. Visitation will be Wednesday, 1:00 till 2:00 P.M., at the Funeral Home, with Stevens Funeral Home in charge of arrangements. Memorials may be made to the Colt Baptist Church, P.O. Box 283, Colt, Arkansas, 72326. You may log on to stevensfuneralhome.net for the online registry. Click link to live zoom funeral service. https://us04web.zoom.us/j/6881722649?pwd=NElxck-VORGhZdEt3Ukp-wOXZhZ1hWQT09, to start Zoom. Passcode YOYv5i.

The family of Christine P. Wilkins Hampton created this Life Tributes page to make it easy to share your memories.

Send flowers to the Hampton family.