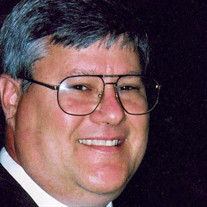 Charles Randall 'Randy' Watson, age 62, of Forrest City, died Saturday, November 30, 2019, at the Willowbend Healthcare & Rehabilitation, in Marion. His death came sudden and unexpected. Mr. Watson was born December 27, 1956, in Smyrna, Tennessee, and was the son of Charles Richard Watson and Nadean Spencer Watson. Before moving to Forrest City he lived in Lonoke and Hot Springs, was a construction manager for A.T.&T and retired after thirty-eight years, and was a member of the First Baptist Church in Forrest City. Mr. Watson married LaVonne Bittle in 1978, and she survives him along with one son, Jeffery Watson, and wife, Brittany, of Little Rock, one daughter, Stephanie Watson Hemme, and husband, Marc, of Forrest City, one sister, Robbie Watson of Lonoke, one brother, Ronnie Watson, and wife, Rhonda, of Lonoke, and four grandchildren; Matthew Hemme, Joshua Hemme, Ethan Hemme, and Aurora Hemme. He had one brother, Ricky Watson, who preceded him in death. Services for Mr. Watson will be held at Stevens Funeral Home Chapel, 11:00 A.M., Tuesday. A graveside service will follow 2:30 P.M., at the Brownsville Cemetery in Lonoke. Vistiaton will be Monday evening 6;00 till 8:00 P.M., at Stevens Funeral Home with Stevens Funeral Home in charge of arrangements. You may log on to stevensfuneralhome.net for the online registry.

The family of Charles Randall 'Randy' Watson created this Life Tributes page to make it easy to share your memories.

Send flowers to the Watson family.