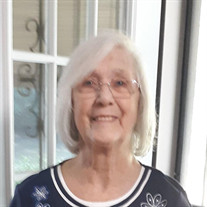 Cathy McKinney, age 79, of Forrest City, died Thursday, December 3, 2020, in Forrest City. Mrs. McKinney was born October 15, 1941, in Marvell, AR, and was the daughter of Hollis Mayo DeShazo and Louanna Harmon. She lived in Lonoke, AR, Palestine, AR, and Hemphill, TX, was a registered nurse, and a member of the Church of Christ in Palestine. Mrs. McKinney married Don McKinney and he preceded her in death in 2014. She is survived by her daughter; Lelia Warren and husband, James, of Forrest City, a son; Todd Elliot and wife, Brenda, of Conway, AR, two sisters; Joann Haynes and husband Don, of Hernando, MS, and Sue Walton, of Marvell, AR, and one brother; Ronald DeShazo and wife Charlotte, of Gonzales, LA, six grandchildren and two great grandchildren. She was preceded in death by her husband, a daughter, Cherral Walker, and brother, James DeShazo. A Memorial service will be held Saturday, December 5, 2020, at 2:00P.M at Stevens Funeral Home Chapel. Stevens Funeral Home is in charge of arrangements. You may log onto stevensfuneralhome.net to sign the online registry.

The family of Cathy McKinney created this Life Tributes page to make it easy to share your memories.

Send flowers to the McKinney family.