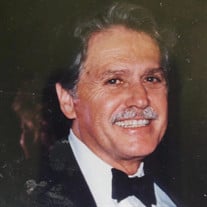 Don Edmondson was born July 19, 1935, the son of Carl and Hazel Edmondson. He died at his home in Forrest City on April 28, 2020. He is survived by two daughters, Jennifer Kay Edmondson and Sharon Melissa Midgett (Missy), two grandchildren, Dalton Midgett and Morgan Midgett, and one great grand- child, Maverick Kemp. He was predeceased by his beloved wife, Ellen, his daughter, Vivian Garrett, and a sister June Edmondson Merrell. Don was a graduate of the University of Arkansas, where he became a Kappa Sig, which he remained steadfastly until the day of his death. He spent his professional career in the hospitality industry. He was an owner of and investor in motels, hotels, and restaurants in Forrest City and throughout the southeast United States. He was remarkably successful and was uniquely good at business. He was even better at life. Don was a giver, not a taker, and he was ever mindful of the needs of others. His and Ellen’s philanthropies included, in addition to myriad local causes, the University of Arkansas, Arkansas Children’s Hospital, the cancer research institute at UAMS, and many others. His service to others included the St. Francis County quorum court, Forrest City council, the boards of the St. Francis County Indigent Care Fund, Arkansas Children’s Hospital Foundation, Campaign for the 21st Century at U of A, Architectural Campaign Committee at U of A, Arkansas Cancer Research Center, and many others. He was most proud of the honor of being Forrest City’s 2019 citizen of the year. Don was grateful for his many blessings, a loyal and steadfast friend, and a snappy dresser. He was never better than anyone else, and was unfailingly kind. He was a member of the First United Methodist Church of Forrest City. There will be a private graveside service for Don at Forrest Park Cemetery in Forrest City, Arkansas. Visit the online registry at stevensfuneralhome.net.

Don Edmondson was born July 19, 1935, the son of Carl and Hazel Edmondson. He died at his home in Forrest City on April 28, 2020. He is survived by two daughters, Jennifer Kay Edmondson and Sharon Melissa Midgett (Missy), two grandchildren,... View Obituary & Service Information

The family of Mr. Carl Don Edmondson created this Life Tributes page to make it easy to share your memories.

Send flowers to the Edmondson family.