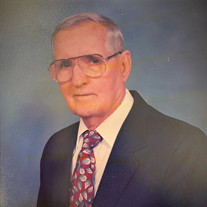 Bob D. Holland, age 96, of Forrest City, Arkansas, passed away on May 12, 2020, at the Woodruff County Health Center in McCrory, Arkansas. He was born on January 6, 1924, in Gentry, Arkansas, to his parents; Alvah Lee and Geneva Gertrude Maxson Holland. Mr. Holland was loved and cherished by his family and friends. From early on he learned courage, discipline, and endurance. At the age of 6 years old, he contracted infantile paralysis/polio. Because of his illness and amazing courage and faith of his mother and a letter she wrote, he and his mother both began a unique relationship with First Lady Eleanor Roosevelt. He also spent time, off and on, with President Roosevelt when FDR visited the “Little White House” in Warm Springs, Georgia. FDR recuperated there and so did Mr. Holland. Mr. Holland was a movie theater manager during the Golden Days of Hollywood. He had an immense knowledge and love of films, and he passed this along to others in his family who have somewhat carried the torch. He read voraciously and he also loved to laugh. He had a wonderful sense of humor, and he shared his sense of fun with all who knew him. He was an amazing storyteller too. For over 30 years, Mr. Holland was a radio announcer and in radio sales at stations KBRI in Brinkley, Arkansas and KXJK in Forrest City, Arkansas. He served on the board of the Water Department in Forrest City and was a member of the Kiwanis Club for many years. He was married to Billie Collins Terhune in 1972. He was a member of the First Baptist Church during his lifetime. He was blessed with many grandchildren and great-grandchildren. He was a wonderful Papa and had so much love for each and every one of them. He was preceded in death by his parents; a sister, Helen Holland Graham and three brothers; Hayden Holland, Don Holland, and his twin brother, Bill Holland. Survivors include his wife of 48 years, Billie Collins Terhune Holland of McCrory, Arkansas, one daughter, Ginger Haydon (Robert I.) of Lee's Summit, Mo., Billie's three children; Eugene Terhune (Mora) of McCrory, Ar., Mike Terhune (Tammy) of Brinkley, Ar., Terri Ballard (Charles) of Holub Crossing, Ar. nine grandchildren, Robert Scott Haydon of Lee's Summit, Mo., Kelly Ruth Haydon of New York City, New York, Jason Terhune (Mandy), Haley Terhune Hedden (John), Johnna Terhune Jones (Steven), Jessica Terhune, Charles Ballard (Whitney), Sara Ballard Smith (Kyle), Brooke Ballard Thrift (Michael); thirteen great-grandchildren; Jace, Rylan, Cameron, Leo, Layla, Sadie, Michael, Jacob, Brylan, Charlotte, Hayden, Henley, William and a new great-granddaugther to arrive, Johnna Scout. A graveside service will be announced at a later date. Stevens Funeral Home is in charge of arrangements. You may log on to stevensfuneralhome.net for the online registry.

Bob D. Holland, age 96, of Forrest City, Arkansas, passed away on May 12, 2020, at the Woodruff County Health Center in McCrory, Arkansas. He was born on January 6, 1924, in Gentry, Arkansas, to his parents; Alvah Lee and Geneva Gertrude Maxson... View Obituary & Service Information

The family of Bob D. Holland created this Life Tributes page to make it easy to share your memories.

Send flowers to the Holland family.