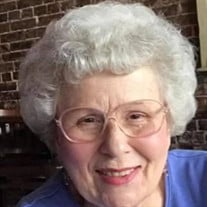 Betty Kathryn Goe Collins, age 82, of Forrest City, died Wednesday, March 30, 2022, at her home in Forrest City. She was surrounded by her loved ones after a lengthy illness. In her words, “don't worry about me, my family is waiting at the gate and soon I will be walking on the streets of gold”. Mrs. Collins was born June 7, 1939, in West Memphis, and was the daughter of Mr. and Mrs. A.B. Goe, was a registered nurse and later joined her husband in the family business, National Carpet One, was a member of the Womens Missionary Union, Senior Choir, Happy Dayers, Cosmos Club, American Cancer Society, Musical Coterie and the Garden Club. Her family life was built around First Baptist Church, many life long friendships were built there and she considered this one of her greatest gifts from God. She demonstrated the importance of family to everyone who knew her. She became a Razorback fan by proxy through her husband, Bryan. She was a die hard St. Louis Cardinals fan until the day she died. She considered Wainwright and Molina her guys. Mrs. Collins married Bryan Greer Collins in 1963, and he preceded her in death in 2016. She is survived by one son, Hank Collins of Forrest City, two daughters; Karri Gregory of Forrest City and Ann Collins Moody, and husband, Craig, of Memphis, six grandchildren who were the joy of her life; Mary Gregory Brown, and husband, Jon, of Wynne, Hannah Gregory Steadman, and husband, Jesse, of Allen, Texas, Molly Collins, Avery Collins and Peyton Collins, all of Forrest City, and McKinley Moody of Memphis, and three great-grandchildren; Ezekiel Steadman, Oaklen Brown, and Adalynn Boothe and many nieces and nephews. She was preceded in death by five brothers; Arthur Goe, John Goe, Billy Goe, Henry Goe, Danny Goe, and two sisters; Lucy Hatton and Mary Jones. Services for Mrs. Collins will be held at the First Baptist Church, 2:30 P.M., Sunday, with burial in Forrest Park Cemetery. Visitation will be Sunday, 1:00 P.M, until the time of the service, at the church. Stevens Funeral Home is in charge of arrangements. You may log on to stevensfuneralhome.net for the online registry.

Betty Kathryn Goe Collins, age 82, of Forrest City, died Wednesday, March 30, 2022, at her home in Forrest City. She was surrounded by her loved ones after a lengthy illness. In her words, &#8220;don't worry about me, my family is waiting... View Obituary & Service Information

The family of Betty Kathryn Goe Collins created this Life Tributes page to make it easy to share your memories.

Send flowers to the Collins family.