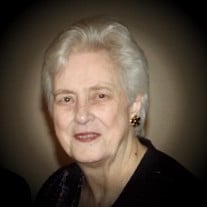 Alyene (Todd) Jones, affectionately known to many as MeeMaw, passed from this life on Sunday, February 9, 2020, at Saint Mary's Regional Medical Center in Russellville, AR. She was 86 years old. Alyene was preceded in death by her husband, Dr. Wayne H. Jones; her parents, Nellie and Joe Todd; and her three brothers. Born on June 14, 1933, in Forrest City, Alyene often joked that flags were put out to celebrate her birthday instead of Flag Day. Alyene was valedictorian of the Class of 1951 at Forrest City High School and worked as a bookkeeper for a local dry-cleaner until she married the love of her life, Wayne, in 1954. She and Wayne traveled the United States and Europe while he served in the United States Air Force. Upon returning to Forrest City following Wayne's retirement from the military, Alyene focused her attention on raising her children and worshipping in First Baptist Church of Forrest City. Alyene enjoyed being active in her church. She maintained many life-long friendships with people from her childhood and others she met on various U. S. Air Force bases around the world. She enjoyed writing in her notebooks and doing various sorts of sewing and crocheting. She was fond of reading cookbooks and loved a good dessert. Alyene enjoyed conversation and was equal parts a good talker and good listener. Alyene is survived by two daughters; Linda (Jones) Powell and her husband, Brent, of Powhatan, AR, and Valerie (Jones) Enchelmayer and her husband, Ernie, of Russellville. Alyene is also survived by five grandchildren; Craig Powell, Justin Powell (Anna), Janai Rindels (Ryan), Jaedon Enchelmayer, Karis Enchelmayer, and four great-grandchildren. She cherished her family and friends and will be greatly missed. Memorial gifts may be made to New Hope Baptist Church of Black Rock, AR, or First Baptist Church of Forrest City, AR, in the name of “Mrs. Alyene Jones.” Services for Alyene will be held at Stevens Funeral Home Chapel, 11:00 A.M., Saturday, with burial in Forrest Park Cemetery. Visitation will be 10:00 A.M., Saturday, February 15, 2020, at Stevens Funeral Home, until the time of the service. Stevens Funeral Home is in charge of arrangements. You may log on to stevensfuneralhome.net for the online registry.

Alyene (Todd) Jones, affectionately known to many as MeeMaw, passed from this life on Sunday, February 9, 2020, at Saint Mary's Regional Medical Center in Russellville, AR. She was 86 years old. Alyene was preceded in death by her husband,... View Obituary & Service Information

The family of Alyene (Todd) Jones created this Life Tributes page to make it easy to share your memories.

Alyene (Todd) Jones, affectionately known to many as MeeMaw,...

Send flowers to the Jones family.