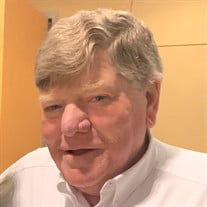 Albert Ray Lewis, age 73, of Forrest City, died Thursday, August 19, 2021, at the St. Bernard's Hospital in Jonesboro. Albert was born November 3, 1947, in Parkin, Arkansas, and was the son of Clearance Otis 'Happy' Lewis and Paula Mae Goodman Lewis. He was born and raised on the St. Francis River outside of Parkin and developed a lifelong love for fishing. He could tell a 'Fish Tale' like no other. He started at a very early age truck driving and later became owner and operator of several service stations. After having moved to St. Francis County he was the owner of Albert's Used Cars in Widener where he helped many people in the area. He also proudly served on the ABSC Disaster Relief Ministry Team where in 2001 he worked in New York after the 911 attack, and in 2005, after Hurricane Katrina, in New Orleans. Albert was an active member of First Baptist Church in Forrest City. He attended the Adult 5 Men's Sunday School Class, whose members will serve as honorary pallbearers. Albert married Kelly Blankenship in 1984, and she survives him along with three children; Michael Paul Lewis, Weston Ray Lewis, and Dustin Albert Lewis, all of Forrest City, one sister, Ida Shelby Cox, and husband, Paul, of Nixa, Missouri, two grandchildren; Johnathon Hunt and Charlie Nicholas Hunt, and several great-grandchildren. He was preceded in death by one child, Diana Lynn Lewis Hunt, three brothers; Robert Lewis, Jack Lewis, and Sam Lewis, and one sister, Barbara Lewis Smith. Services will be held at the First Baptist Church in Forrest City, 1:00 P.M., Saturday, with burial in Forrest Park Cemetery. Visitation will be Friday evening, 6:00 till 8:00 P.M., at the church, with Stevens Funeral Home in charge of arrangements. Memorials are to be made to the ABSC Disaster Relief, 10 Remington Dr., Little Rock, Arkansas, 72204 or the SFC Elves, P.O. Box 924, Forrest City, Arkansas, 72336. You may log on to stevensfuneralhome.net for the online registry. “A Friend To All Who Knew Him”

The family of Albert Ray Lewis created this Life Tributes page to make it easy to share your memories.

Send flowers to the Lewis family.